I have had a building partially collapse….actually we lost 2 sections of the roof, then a few days more, when all the “Brazilian Engineers” were inspecting, one guy yelled from atop a 36 ft scaffolding snd said, It’s gonna fall. And it did.

I was the project manager to get a new roof….and learned a lot about concrete construction. I was also the Engineering Manager for a “bomb proof” building in .Sanford….so this was fascinating.

I did find a summary, but the paywall from the Anchorage Daily News will not copy.

The gist was this….maybe 6 causes or a variety or interdependent issues.

The failure was almost a perfect implosion demolition job. If you look at the video, you might not pick up the subtleties of that…here is a graphic that I found. I did not realize the full gravity nor the complete failure. 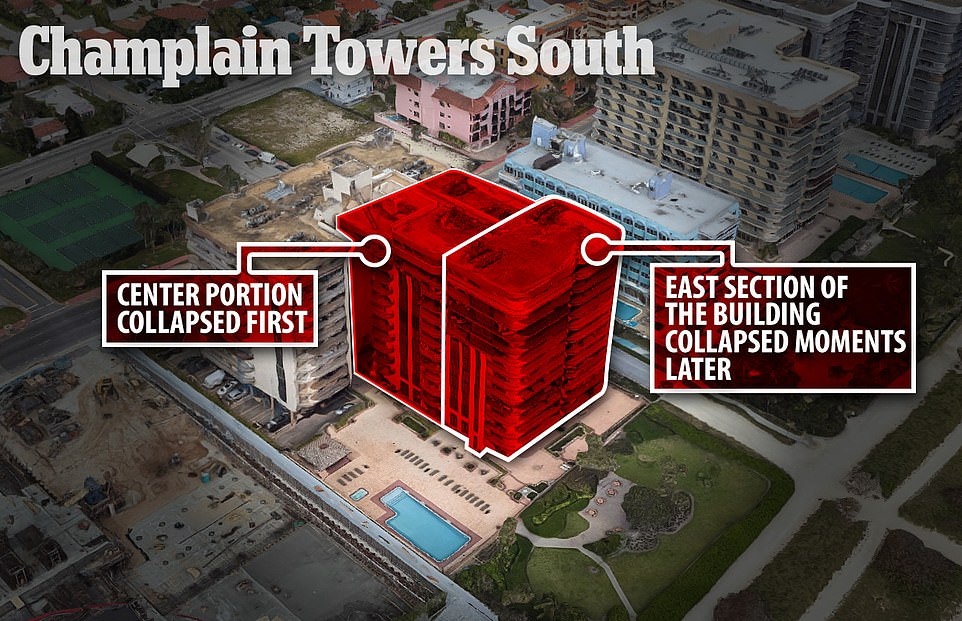 Before I go into my “thoughts”, there was one factoid shared yesterday that might change the theories. A lady on the fourth floor called her husband and said that the building was shaking and that the pool, which was lighted and visible from her balcony had “disappeared” of totally sunk. Then the line went dead….

The two main theories were that the “foundation” slab had failed. The comments about the improper drainage and the impact on the slab were discussed in the Engineer’s report in 2018. That also discussed the deteriorating columns of the underground parking garage. I THINK it was underground and you drove down a ramp to park and there were units on the ground level or first floor.

There were also reports of water (salt or brackish or fresh?) in the basement or on the floor of the parking garage….and that was an observation recently made.

Back to the two main theories,…

Foundation failure. Corrosion, improper construction, water penetration or drainage (surface or seawater pressure?)….the list goes on. What is not clear to me is whether the foundation slab was a conventional design….X inches of Y PSI concrete with a rebar matrix. OR was it a post tensioned slab. That means that cables….up to maybe 1-1 1/2 “ diameter were embedded in the slab and as the slab cured, the cables were connected to eye bolts and the bolts were torqued and the slab was in a state of compression. My building in Sanford had a large section, cordoned off by two tunnels with air locks on each end. The floor, with a complete basement full of vacuum pumps was stressed…..as was the walls and the roof. There were two large Jet Engines or Joy Blowers that could inflate or deflate the building to maintain barometric pressure…within 5/100 of an inch. We had to maintain temperature, humidity and pressure in order to flow test as well as adjust the main metering rod (it was tapered and centered in the main jet) of a single barrel carburetor. We did that through the worst hurricanes. The air locks were for safety. One individual decided to “exit” using an emergency door for a smoke break. The building was being pressurized or inflated. He was literally blown or thrown out and the door was ripped off the hinges….a high quality steel door that had panic hardware and an unbelievable gasket, We had to add a countdown timer to shut down the motors on the blowers to the “emergency door” panic bar…..and there was a solenoid lock instead of a mechanical lock.

SO…what kind of foundation slab was there?

The second theory was that the piers or pilings supporting the foundation slab had failed and that the foundation cracked and then the build imploded. I still can’t get my head around the failure now that there was evidence of the pool just “sinking” or disappearing. If the sinking or slab failure started in the pool area, then once the slab failed, it might be logical for the building to shift….putting more weight on the front or poolside columns and then it toppled forward. BUT….I can’t reconcile the sinking pool….unless it went down so quickly and the first or the west portion failed and then the east portion.

Comments and discussion to help me understand is greatly appreciated.

BTW, my Brazilian roof failure was a three piece concrete arch or a trussed roof….put up with three cranes and held in place. If you make an arch or an arch with your thumb and first finger and have a short length of a dowel between the tips….that is the design. The dowel is the lower beam. NOW, to secure that three piece arch (from thumb tip to finder tip, you use a rubber band, the roof truss had the 3 piece arch and a linear beam….and there were 25 odd strands of 1/4” wire or cold rolled stock wrapped around the ends off the arch. The beam sat on a ledge on the side columns. During construction, there was a loom or a truncated cone on each end. This cone was pulled by a cable to tighten the strands or put tension on the “rubber band”. Once the tension was measured, buy the amount of torque or hydraulic pressure to separate the two end cones, the rebar was added to the cable loom and concrete was poured to encapsulate the strands and hold the cones in place. Water from a poorly designed and NOT Maintained roof seeped down on the end and the bare cables on the ends corroded and then finally, one or two failed….the three piece arch expanded and pushed the end columns out and the beam’s ledges let go or sheared. BINGO….the roof collapsed… there was 7 or maybe 9 sections of the roof and a total of 5 failed….

We chose STEEL trusses and rebuilt and also inspected and added reinforcements to the ones still standing….